David’s Smile in a Day

David’s Smile in a Day 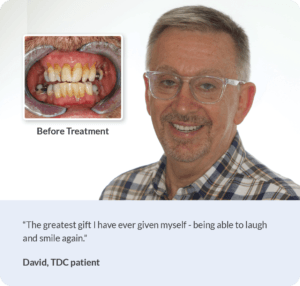 “It’s the greatest gift I have ever given myself – being able to laugh and smile again.”

In May 2019, David McLean was watching TV when he saw TDC patient Rebecca Webbon undergoing Smile in a Day dental implant treatment to restore her teeth, smile and confidence.

“On came Rebecca – she didn’t have the same story, but when she spoke about her problems there was enough in her story to resonate in me.

She struggled for years with her teeth as they affected her confidence and her ability to eat properly.

When she opened her mouth to smile and showed her new teeth – I was so happy for her.

I recognised the TDC logo in the background behind Michael and Anthony (Zybutz) and decided to take myself in hand, to at least go for the consultation.

That someone of Rebecca’s age and position could do this – I dialled the number straight away, and within a week I had my consultation.”

“I hated my teeth from a young age”

Originally from New Zealand, David came to England in his early twenties.

“I hated my teeth from a young age.

Aged 10, I had too many baby teeth and needed extractions. I heard the dentist discussing my teeth and saying that they weren’t worth spending money on and I never went back to the orthodontist.

I interpreted that to mean that I wasn’t worth it, which started a lifetime of feeling unworthy.

I had so many trips to dentists over the years, but only when I really needed to go for crowns and extractions, and each visit was filled with fear.

I only had one straight tooth in my head, the rest were all crooked and ugly.

I wouldn’t smile widely because people would see the gaps.

I really wanted a nice smile. I thought; “You can do this!” and tried to have teeth straightening treatment.

I paid a lot of money to have moulds made, then was told it wasn’t going to work for me as my teeth were not strong enough.

That took me straight back to my childhood, and knocked me back, thinking that it’s not for me.”

Realising that self-care is so important

Eventually, with lifestyle impacting on his well-being and teeth, David could no longer chew on his back teeth.

“They were in such a bad state that I knew I had to do something about it.

I considered going abroad and even had two consultations, but I just felt confused as their approaches were so different. I realised that I wanted to be on home turf.

I had come to realise that self-care is so important and one of the things that you need to look after most is your teeth – but I thought that nothing could be done for me.

So, seeing Rebecca on TV was the push that I needed.”

My consultation at TDC – “I felt ashamed, but immediately at ease”

“I thought I’d have to be sedated going to my initial consultation, but I felt almost calm.

I had looked at the website and read the patient testimonials and had started to believe that there was a way for me to do this. It gave me the courage.

I was ashamed to show my mouth, but the second I met Anthony I was at ease and felt I was in safe hands. I was honest with my story and he put my mind at rest.

I fully understood the process and knew that if other people who were as afraid as I was could do it, so could I.

Everything TDC has told me, from Day 1, has been spot on.”

The day I got my new smile

“On my treatment day, Michael (TDC lead surgeon and specialist periodontist) sat with me and talked me through every step of the day ahead. I just wanted to get on with it!

I was nervous but totally at peace with my decision.”

Life since TDC Smile in a Day

“Having my teeth and smile restored has been completely and utterly life-changing.

I wish I had been able to do it years ago. I have had to get used to having a full set of teeth again, learning to eat properly and it has taken a bit of time to learn how to smile naturally.

I spend a lot of time just smiling now – I just smile all the time. That is 100% to do with my new teeth – it has made me a happier person.

I feel much more open-minded towards everything. In fact, a week after having my temporary fixed teeth placed, an old friend rang and invited me to Australia.

I mentally composed a polite refusal then realised that I had new teeth and could do it. I went, and it was the best two weeks I’ve had in many years.”

“It was worth every penny I paid”

“I had always had tooth envy and knew that if I could change one thing about me, my teeth were top of the list.

I now feel confident and relaxed.

I would recommend TDC and Smile in a Day without hesitation. 100%.

I’m actually a very private person, but if sharing my story can help someone who felt like me, and who felt that nothing could be done, I am happy to talk about it. I have surprised myself.

It’s interesting how in life you know when the moment is right.

I was spurred on by Rebecca.

I’m going to write her a letter to say thank you for motivating me to act – I’d love to shake her hand.”