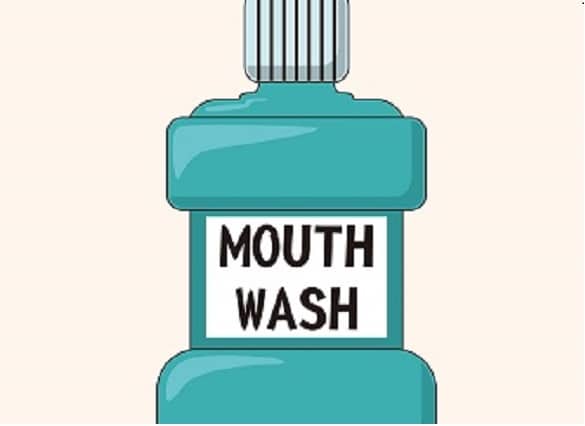 It was probably one of the year’s most shocking advertising slogans: ‘Corsodyl ‒ for people who spit blood when they brush.’

And the image on TV of a woman waking up and spitting her teeth into her hand has no doubt scared many people into using this well-known brand of mouthwash.

So why, then, did the Advertising Standards Authority (ASA) receive 20 complaints about this advert?

‘Bleeding is indeed often a sign of serious gum disease, but if your gums bleed you can’t rely on a mouthwash to combat that disease. The ASA didn’t uphold the complaints because what the advert is saying is in fact true ‒ but it’s only half the story.’

‘Yes, Corsodyl contains chlorhexidine digluconate and will stop your gums bleeding, but it isn’t going to help prevent or control periodontitis, gum disease that’s serious and that causes bone and tooth loss.’

According to research published in the Journal of Periodontology, the use of a mouthwash containing chlorhexidine digluconate has not been shown to be superior to effective manual oral hygiene, in other words, good old-fashioned brushing and flossing.

‘Using Corsodyl will mask the symptoms rather than tackle the disease itself,’ says Dr Zybutz, ‘and if your gums stop bleeding because you’ve been using mouthwash, you’re much less likely to consult a dentist about the problem.’

If mouthwash isn’t the answer, what should those of us who spit blood when we brush do instead? Firstly, don’t be tempted to self-diagnose or self-treat gum disease, warns Dr Zybutz.

‘If you’re worried about the health of your gums, visit your dentist, and if he or she diagnoses gum disease, insist on being referred to a periodontist (gum specialist). Gum disease is insidious as it’s not painful and takes a long time to develop so even dentists sometimes fail to spot it.’

If gum disease is diagnosed, you’re likely to be told to remove the factors causing it by cleaning your teeth regularly and thoroughly and visiting a dental hygienist for a professional clean. And if you smoke, you’ll be advised to quit.

‘Some dentists say that stopping smoking is even more important than cleaning your teeth ‒ and I’m one of them!’ says Dr Zybutz.

‘Smoking is the biggest known accelerator of gum disease because, among other things, it affects the blood supply to your gums and has a direct toxic effect on your body’s defences. It also means there’s less oxygen in your mouth which creates an environment that favours germs.’

Interestingly, it’s also important to make sure that if you have diabetes it’s under control: ‘People who have poorly managed diabetes have more gum disease,’ says Dr Zybutz, ‘and gum disease makes it more difficult to control diabetes, so your health will benefit in two ways if you take better care of your gums.’

Who should use mouthwash?

Dr Zybutz says that mouthwashes containing chlorhexidine digluconate can be very useful in the short term: ‘I recommend Corsodyl to patients after surgery as it’s antimicrobial and sticks to the gums for a long time so it’s great for killing bacteria.

However, if you use such mouthwashes for longer than four or five days there’s a risk of staining, you may start to get a metallic taste in your mouth and you may also find food tastes different. Most importantly, however, you’ll notice an increased accumulation of tartar (also known as calculus) which is brown and unsightly and will have to be removed by a dental hygienist.’

The bottom line? ‘I don’t generally recommend that my patients use mouthwash because to remove plaque properly you have to do the work,’ says Dr Zybutz.

‘If you insist on using mouthwash because it makes your mouth feel minty fresh, by all means do so, but remember that it’s not a substitute for cleaning them thoroughly. Make sure, too, that you choose one without alcohol and that contains fluoride ‒ the latter is especially important if you’re prone to tooth decay.’

If you’d like more advice on how to prevent or treat gum disease, or to find out more about our Smile in a Day same day dental implant treatment, get in touch for your free consultation* here, or call 02035536415.