Home > Blogs > How to cope with a sensitive gag reflex

How to cope with a sensitive gag reflex 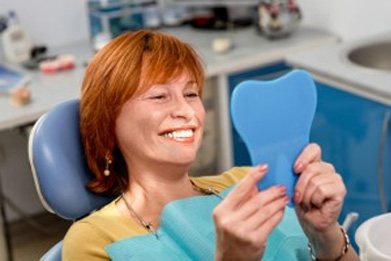 We have a gag reflex for good reason. It’s essential to our survival, making sure we don’t come to harm by swallowing anything dangerous. Yet there are times when it would be handy to be able to switch it off.

As part of our Smile in a Day dental implant treatment, we use mirrors and other instruments for the initial consultation, and the gag reflex can sometimes get in the way. For some patients it can be a major issue, so we have special techniques for dealing with it.

It’s not your fault

Patients can feel embarrassed, as if they’re letting me down by not being able to keep their mouth open, but that’s really not the case. These are reflexes, and by definition, you can’t control them. It’s not your fault if you gag; it’s just your body trying to look after you but being over-protective.

At TDC, we never play it down and casually tell patients to relax. Choosing to relax is extremely difficult, so instead, we offer a variety of ways to help you.

Firstly, we simply take extra care, being particularly gentle, and keeping instruments as far away from the throat as possible. Normally dentists will tell you to ‘open wide’ but if the reflex is causing you problems, we will try to work with your mouth less open, which should help.

Some patients need more support though, and in these instances, we can use acupuncture. I am a trained acupuncturist. By using a needle at the crease around halfway between the bottom of the lip and the chin, you can block the gag reflex almost entirely. I will either do it with an acupuncture needle, or sometimes even just pressing with my fingernail is enough. I must add that acupuncture is practically painless. However, for those who really don’t like needles, a dab of salt on the tongue can often have the same result.

Help even in the most extreme cases

One of our patients had such a strong gag reflex that even when he was under sedation it was still there. This is extremely unusual, and may have been caused by an accident he was in when he was younger. He almost drowned, so understandably he was hypersensitive. However, even in this extreme case, we solved the problem. The anaesthetist I was working with suggested something that sounded very unlikely, but it worked perfectly. By placing a needle at a particular point in each ear, the gag reflex was completely blocked. This has been supported by scientific research, and is a technique I can now use if I ever need to.

So if you are interested in our Smile in a Day treatment for same-day, fixed dental implants but are at all concerned about the procedure, arrange your free consultation here and we can talk you through it all. Alternatively, call 02035536415 for a chat with one of our friendly Patient Advisors.